Should we change PoW algorithm?

While MTP has served its purpose, it has a lot of flaws.

It is first of all an immense bandwidth hog as the 200 kB proof needs to be sent with every share.

It also consumes a lot of space on the blockchain as the 200 kB needs to be included in every block even when it’s empty. This leads to massive bloat.

While much more ASIC resistant than previous designs, FPGAs with large memory banks are already a thing and the idea of memory hardness being anti-ASIC may no longer hold true.

Newer algorithms such as ProgPOW and RandomX have come about and have much better design to them.

There is opportunity to rejig MTP but we believe it’s merely a stop gap solution and we rather be focusing on algorithms where the work/audit is already done rather than devoting resources to reassessing MTP again or coming up with a new algorithm.

While this is not an immediate priority (something we can look at after Lelantus), we wanted to gauge community sentiment to an algorithm change.

Pros - quickest solution - nothing to do

Cons - blockchain bloat and bandwidth issues are causing problems and may impede scaling Zcoin to where it needs to go in the future. FPGAs are possible.

Pros - Small change while buying Zcoin time and holding off FPGAs and ASICs a while longer. On Discord DJM34 suggested removing old proofs after a while to reduce blockchain size (this may be more complex).

Pros - other coins use it (already tested in production) - both software and hardware audits already done. ProgPOW is designed to be FPGA proof due to its changing nature.

Cons - other coins may use it (may make it a larger more profitable target for FPGAs and ASICs) - FPGAs and ASICs already looking at ProgPow (source?)

Cons - individual miners will have a hard time competing with very large CPU farms already in place. Direct competition with Monero hashrate.
Some also feel that RandomX is ASICable.

Cons - most likely unproven and requires the most development resources.

i would prefer progpow because it was audited and its stays on gpus.

from your description, definitely prefer something more efficient, with proven and audited works so we don’t need much resources from Zcoin team. ProgPOW!

Why are we not using the Znodes to do mining in the future, effectively moving to POS from POW?

Hi! I strongly believe that we should stick to GPU mining algorithms, because changing the mining mode it’s quite the same in moving from POW to POS, making the rich richer. For me, as example, would mean money loss to throw away my Nvidia miner, so I wouldn’t do it. I would move to mining other coins, even XZC seams best option, for me, to invest in my hashpower. The market is bleeding and we, the miners, can’t afford to just change the equipment before we take back at least the invested amount.
But, that’s me…

Agreed. Much like Cryptonight-R was a temporary patch for Monero, MTP needs to eventually (sooner than later) be absolved for a more efficient Proof-of-Work algorithm; vital when thinking long term

ASIC friendly should be a last resort as it further concentrates mining centralization. Not necessarily a bad thing, but we’ve seen how this plays out with Bitcoin and others.

With that being said, believe that moving forward Zcoin should continue in the direction of GPU’s such as ProgPoW, etc. Would be most excellent to see Zcoin capture a portion of GPU miners who defect from Monero come end of November. Could present itself to be advantageous for Zcoin.

Let Monero pursue CPU’s with RandomX and see how it pans out. There’s no guarantee that they don’t revert back to a GPU centric mining algo. And oPoW seems more concept than anything at this point… great to be open-minded and explore other avenues though

Go with something that is working / audited and is more efficient. If oPoW can proof itself in production this seems to be the way to go.

With the regional differences in power costs not going away anytime soon the same story will play out when the incentives go through the roof again (aka prices skyrocket) as with the asic concentration. Big operators will be incentivized to buy up CPUs / GPUs and run them in places with low energy cost. This will lead to a further centralization as the hurdle to entry will keep increasing for new operators.

The question then becomes how long will oPoW or a similar alternative need to proof itself to the market and how does that align to the Zcoin timeline. What is plan B if now valid alternative arises in time?

I agree MTP was necessary - but needs to be replaced with something else that works well, but doesn’t bloat the blockchain with as much data.

I’ve been following another coin that just went live in Sept. (EPIC Cash) - and I think they are the first coin to actually implement multiple algos running in parallel.
For the first year 60% of the blocks use RandomX (for CPUs), 38% use ProgPow (for GPUs), and 2% use Cuckatoo (for ASICs). Each Era (year or so) after that, the percentages go down for RandomX, up-then-down for ProgPow, and up for Cuckatoo - in theory to secure the network as time goes on.
This is an attempt to ‘spread the wealth’ so-to-speak - and allow better distribution of the coins to more people.

It’s not clear if Epic will actually survive - and in my opinion their current issues are related more to issues with public acceptance of the technical details related to setting up Mimble Wimble servers to run the wallets rather than the algos they have chosen.

There are both benefits and downsides to a multi-algo approach:

I was very surprised to see how well (more-or-less) Epic’s multi-algo blockchain actually functioned - from day-one.

If going with only one algo - I would vote for ProgPow over RandomX or any other algo that hasn’t proven itself yet like any oPoW (of course as time goes on additional algos could be added to a multi-algo setup).
Full disclosure - I mined EPIC for a week to try it out - switched to dual mining EPIC/Zcoin for two weeks - and now I’m back to Zcoin 100% - Zcoin is THE BEST… Keep up the good work!!!

I hope this helps …

I disagree with the ‘rich getting richer’. Buying high end miners is very cost intensive. Only rich are buying these as they can afford to take the risk.

I guess I would vote for optical Proof of Work, since this can at least solve the negative Environmental issues of POW.

I’m trying to think of some sort of setup to help minimize the rich getting richer. Perhaps there could be some sort of small amount of staking that gets rewards vs 1000 XZC node. Or perhaps a community fund that receives a reward each block that is then donated to charity?

My main point though is that if we did move towards a POS solution, it would be easier to adjust rewards so that there could be community funding for programming, rewards for core team to keep developing.

Zcoin has to be PoW (or maybe proof of storage). It has to have a link to the real world.
All blocks have to be produced by miners, there must NOT be a hybrid consensus where, miners/skaters both produce blocks.
Zcoin also should be asic resistant, or it is just not decentralized.

As for the algo, as long as it is PoW and asic resistant it does not matter. 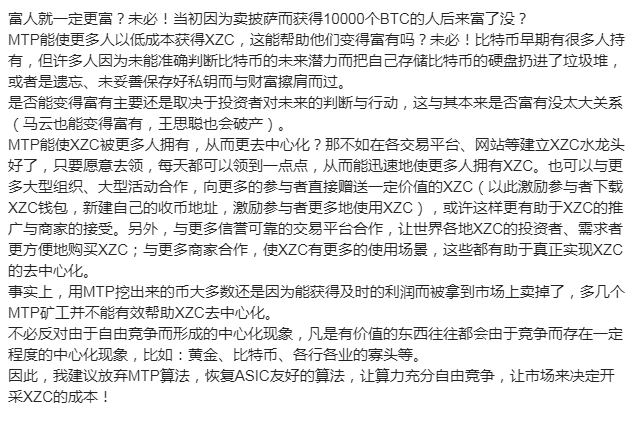 Argh why is this an image lol

In case anyone was having trouble translating @madaocheng 's post because it was an image. Here’s a rough google translate using image translation function on mobile.

The rich must be richer? The people who got 10,000 BTC because of selling pizza will be rich later? | MTP can make more people get XZC at low cost, can this help them become rich? Not necessarily! Bitcoin It was held in the early days, but many people threw their hard dad who stored bitcoin into the trash because they could not accurately judge the future potential of bitcoin, or they forgot to pass the wealth with their private keys forgotten and not properly stored . Whether or not you become rich mainly depends on investors’ judgments and actions on the future, which has little to do with whether they were rich in the first place (Ma Yun also became rich, and Wang Sicong would go bankrupt). | MTP can make XZC owned by more people, so as to be more decentralized? How about setting up XZC faucets on various trading platforms, websites, etc. "Okay, as long as you are willing to pick up, you can get a little bit every day, so you can quickly Make more people own XZC. You can also cooperate with more large organizations and events, and directly give more participants a certain value of XZC (to encourage participants to download | XZC wallet, create your own receipt address, incentive Participants use XZC more). Maybe this will help XZC’s promotion and merchant acceptance. In addition, cooperation with more credible trading platforms will make it easier for investors and demanders of XZC from all over the world to purchase XZC. : Cooperate with more merchants to make XZC have more use scenarios, which will help to realize the decentralization of XZC. In fact, most of the coins mined with MTP are still obtained because of the timely profits. Selling a few more MTP miners in the market does not help XZC decentralization effectively. It is not necessary to oppose the centralization phenomenon formed by free competition. Everything that is valuable is often replaced by There is a certain degree of centralization due to competition, such as: gold, bitcoin, first-class in various industries, etc. Therefore, I recommend giving up the MTP algorithm, restoring ASIC-friendly algorithms, allowing the computing power to compete freely, and letting the market decide mining The cost of XZC!

I completely agree, transition to POS Should get the goal. and lowering masternode collateral.

I’ll vote for whatever results is more decentralization and more security.

Thanks for the translation!

Thus far what I have gathered from the forum:
GPU friendly
cryptohype, jleony, AlexD, mugen, Zed (but also for exploring multiple algos), omg