I think that like all companies (firo is a bit like a company, it develops technology, it remunerates devs, employees, etc…) the vote must be proportional to the possession of firo…, can be put a firo holding minimum? but if a holder of 10 firo has the same voting power as someone who holds 10,000 firo, it would be illogical and counterproductive. do not forget whether you are a small holder or a whale, the interest for both and to see firo grow and are also priced.

Sorry for m’y english i use Google translate

In the next long term bear market, The FIRO price may drop from 3usdt to 1usdt, or even to 0.5usdt, or even lower.
In such a bad FIRO price environment, still holding the FIRO firmly is the supporter that our community really needs,They are 4,000 more masternodes holders.
Return the voting rights to masternodes holders, who are also loyal FIRO supporters who have lost the most money.
Return power back to masternodes holders groups that continue to suffer in a bear market,
Throw out those rhetorical, noise-making enemies who are reluctant to invest even $1,000 in FIRO.
@reuben @poramin

And what would you change ? I haven’t seen any constructive or detailed suggestions beyond the ‘attract investor’, make price rise or give masternode more power nor even bothering to read other posts.

Perhaps you should share what you intend to do with that power.

First step in any organization is put a good voting system for that organization to make good decisions that the first step.
For example the price issue now is related to the limited use of the coin now if we think in this problem we will make proposals who will decide what to do, is that right or wrong.

Example solution for low prices is find use cases for currency like if the community here is about 2000 people around the world every one of us have a career that deliver service mostly, what if we transact our services using FIRO coin only and estimate our services price using FIRO only then we can make just a little economy that use our coin FIRO we can start by making new division in forum then we make our bids there and test the idea using low value testing resources.

what would you change ?

Performance speaks for itself
reuben worked full-time at the end of 2017, then became COO, then CEO & co-founder. Under your 5years leadership, the price of FIRO fell from $120 to $1, and then you passed the buck and said you were just a Project Steward 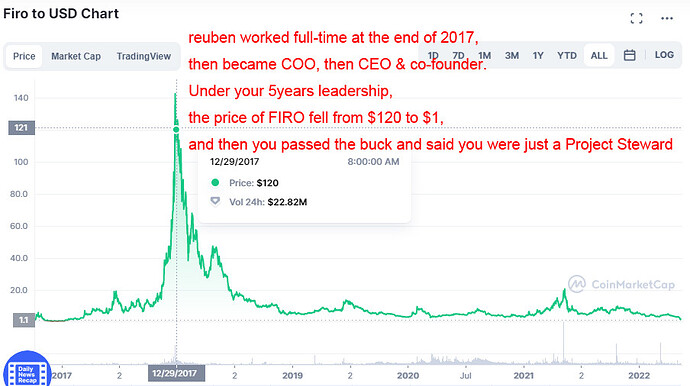 When I began getting involved with Firo at the end of 2018/2019. What I observed was mostly low rent, ‘Anti-Chad’, meme challenged, shallow, whiney, emotionally fragile community members with a few exceptions who are luckily still around.
This was the biggest issue Firo had to overcome. It’s incredibly hard to grow Firo with that kind of community. Who wants to spend time or be associated with a bunch of low value anti-Chads, and who would want to support people like that? [honest question]

Fortunately overtime Firo has attracted some quality community members, and the Chad ratio is certainly improving. In time as the network grows, and the positives that come with growth will come to Firo.

With regards to Reuben. Picking a blowoff top and alluding that he’s the cause of Firo’s low price is disingenuous. As if the community bears no responsibility?
Thats the kind of anti-chad behavior I’m glad to see less of these days.
Sure it’s the communities duty to speak up, if we think Firo’s is moving in the wrong direction, but that wasn’t what that post was.

Regarding masternode voting. The biggest risk I see is it creating an army of foolishly greedy Do Kwon style voters, that vote to turn Firo into a scam as long as they can profit from it. I think there are a few people who would happily do that.

Long-term holders are true community members, and even can be said to be the foundation, a group that supports prices. There are many Chinese in the community who are proof of Firo’s successful promotion in China。Yes, there are many low-level people in China and in this world. It is the management error of the team and the community that is not handled properly, not our fault。Our class status is low, we are discriminated against, we are the inferior people of the world, we want to raise the price of Firo, we have no way。

I don’t know what being Chinese has got to do with anything. But my point still stands. Back then the communities attitude, strength of character, resilience and humor was piss poor. What they were good at was begging to the price gods and playing the blame game as to who needed to be sacrificed to the price gods. Everything is dev teams fault. No sense of personal or collective responsibility for Firo’s traction. The best thing to happen to Firo was most of them leaving. Anytime there was optimism they’d dump on it, and sour everyones mood.

Coming from btc,eth, & xmr. I was shocked by the difference in community quality. Few Chads to be seen… just Doomers.

The truth is, the community could collectively all add value to Firo by investing some of their time. There are a few notable examples of community members doing just that now. But a lot of us could be doing a lot more. However back then… just shit as far as the eye could see.

So, we approve on making members more active but how without consider their involvement in the project how excite them.

We have to assign what missed in the project that exist in other similar projects in market cap value that got much price more than FIRO like dcred or horizen.

Tim was bad and attacked the coin when he could not get what he wanted. Dumped for a year. Hurt me and the rest if the community doing that dumping on us.

I do not care if he has the sweetest character to his friends.

So I do not agree your premise.

Then through such a long time, it proved that you were wrong to let Tim leave. Maybe Tim’s idea was right at the beginning. Now FIRO is getting worse and worse, but it is not getting better and better.

I’m not defending Tim. I hate Tim too, he and his friends have attacked me, and I have attacked him. But they are just ordinary people, like everyone else in the community, it is his freedom to sell his coins. According to my observation, he only complained about Reuben and the team in the QQ group or some other groups, and did not do a planned incitement. There is no evidence that he made a 51% attack, but the community repeatedly associates him with the 51% attack. Of course, I have no objection to this. A common enemy can actually strengthen the cohesion of the community. But it might be another option if we could cooperate with them at that time.

There may also be an overlooked reason for his departure: the renaming of Zcoin to Firo. I remember voting two or three times on Twitter and it was all about not changing the name (if I remember correctly), but in the end it did. He publicly stated that he bought XZC, not FIRO. In fact, when I knew that Zcoin was going to change its name, I was also a little shocked at that time. I believe the rebrand must have hit the community a bit.

But these are things of the past. Sorry to say this now because I used to belong to the silent Chinese community and didn’t want to be involved in these dramas. I’m not trying to deny the rebrand or defend Tim, I understand that something arbitrary needs to be done early in the project. Just answering some questions from a personal point of view, maybe I’m wrong. And I’m just an insignificant person, you don’t need to pay too much attention to my words, I’m just an ordinary coin holder.

What was the proposes of Tim that you think was good for the project?

I do not know. His original proposal for a masternode of 5000 XZC or 10000 XZC was mainly to increase the price, but it may not be good for the long-term vision of the project. I heard that the Masternodes is Tim’s proposal in early 2017, and now the Masternodes implements InstantSend and ChainLocks, and all our masternode holders, hehe.

You won’t want to deal with him, he doesn’t cooperate well and has a bad temper.