Have you heard about Safe Network by MaidSafe?

I’ve been following the development of Safe Network and its to be created (placeholder) Safe Network Token for a while and I found out about firo by a poster on that forum (safenetforum.org)

it actually is gonna be not based in blockchain technology but it is being made to be super performant and free of charge transfer. the token will be used for buying one time puts (uploading files) to the Safe Network which is decentralized encrypted storage and gets (downloads, browsing) is gonna be free for everyone.

its actually a development journey longer than bitcoin and it aims to provide permanent and anticencroship file upload and download.

its tuted as the new internet (web0 not web3) and I hope you like it and support it!

the Safe Network now is in an advanced state where we await for all the bits to fall in and then optimise and then release and then second release when we have also upgradability.

super star and initiator of this is David Dirvine and you can find him talking about it if you search!

tl;dr;
Safe Network is not blockchain based permanent storage one-time fee and Safe Network Tokens will be able to be traded for no cost!

It’s been 8 years since ico, still no mainnet

Strange first post. Also I think maidsafe is actually older than Bitcoin itself.

Maidsafe is late. web0 is up for 3 years now backed by proof of memory mining. 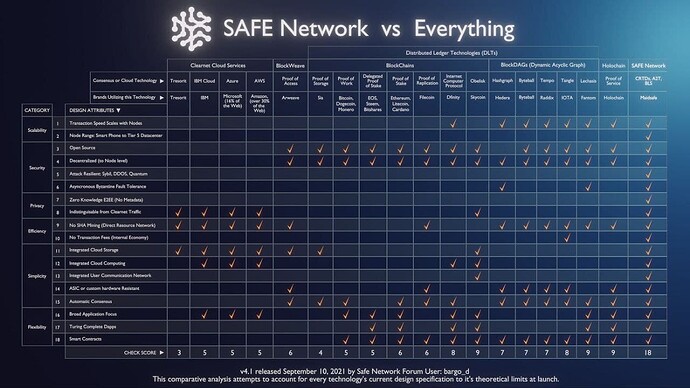 well I got to know firo from one of the interviewers of safe network who is into FIRO. so I thought to make a plug for my passion

source of table SAFE Network versus (vs) Everything (v.2) - #73 by Bargo_d - Features - Safe Network Forum

Are we confusing Safe Network with Maidsafe? I thought they were separate projects.

afaik, it is one thing, Safe Network is the network name, Maidsafe the project.

And yes, in its original form, it is older than BTC, never gets finished, sunk quite some BTC there, back in the days…

I like the safe Network project, it was the best coin project I found back in 2014/2015. Unfortunatelly I think they lost timing and for a project to take so long I don’t have same confidence now but still hope they finish it because the world needs it more than ever.

they got a mentality do it right and not ASAP, I really am backing them on that cause we dont just need another storage option but a safe network principles!