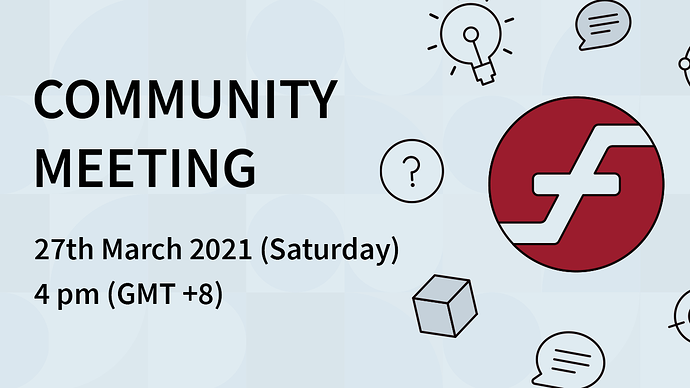 how to be on more exchangers to distribute firo.
how to let more people to know firo.

Reminder on this! Got anything you want added to the agenda?

Translation of the main parts of the Firo website, this is essential to bring more people in from around the world. I believe the simplified Chinese version is nearly ready to go, any updates?

The Firo Community meeting is being held in the middle of my sleep time - again - (it will be 4AM here) - so I will not be attending.

I do have a couple of ProgPoW comments/questions if they can be included in the discussions that would be great:

1 - What will be the entry level GPU requirements for mining with FiroPoW? (it’s currently 4.4GB video memory for MTP).
Depending on the GPU memory size requirements this may be a double-edged sword - a smaller video memory requirement (say 3GB or 4GB) will allow more ‘normal’ people to participate in mining Firo (more decentralized distribution) - which is great - but it may also allow large mining farms that have thousands of older GPUs that can be redeployed to FiroPoW thus re-centralizing the distribution. If a larger size is used (say 8GB) - this may upset existing miners if existing hardware (like 6GB) can not be used to mine FiroPoW.

2 - What mining software will be able to mine FiroPoW - will it be existing ProgPoW software, or specialized only for FiroPoW? 1. No that is why the GPU market is the way it is… The network will consume less electricity, but it’ll freaking suck because everyone is using a overpriced board with a bunch of redundant bandwidth on it(edited

The higher end cards are extremely inefficient and power hungry per 1.0 mh/s MTP

FIRO runs best on cards that meet the mem requirements that are strong on their core, not vram like ETH

Only these cards can partcipate in mining
The current limitation on what gpu can mine FIRO is perfect, because yes it gets extremely inefficient once you hit the 4gb area and lower. Use the limitation for hashrate efficiency because that goes hand in hand with electrical efficiency and network efficiency. Electrical efficiency is already massively incentivized anyway by miners. Anyone who’d set up a huge farm of power hungry garbo cards is going to lose their small profit margin from HUGE amounts of power cost to increasing network difficulty… WHICH… FIRO has a considerably low difficulty considering home miners can actually solo mine. The network is already so tiny, once minerville takes off on FIRO some more the power will likely cost too much to even use. No one would use the cards anyway, and if they could, they LITERALLY wouldn’t LAST long enough in profitability to be a concern to the efficiency of the network. FIRO finally looks stable and pure after all the past things. If it’s not broken don’t fix it. The current limitations work. I would meet in the middle and suggest a 5.4-5.5 GB minimum VRAM requirement because 4ish GB cards that are relevantISH now won’t be anymore once FIROs network hashrate goes up over time and I think they’ll grow irrelevant rather quickly over the coming next year.

2. I think it’d be neat if FIRO could have at least one mining software that it fully backs so home miners find it safer and easier to securely acquire clean FIRO mining software.