This post is inspired by the bear market situation and Firo February expense report.

I have been thinking about how a community could grow and have concrete infrastructure to support a blockchain project. The reason is because with the decentralization spirit of blockchain, community is a vital asset and something that makes the project strong.

However, it is not an easy task to have a solid and constructive community. Hence, I believe an infrastructure that could help to incentivize community members to be more engaged and involved in growing the project is important.

First, I believe there is a need for Firo to leverage additional financing source apart from the block rewards. Besides diversifying the source of funding, it is also an area that is worth exploring, that could make the project have larger reserve to keep everyone warm during the winter.

Second, as stated in the background above, our community need to stay together and not divided so that we could be a solid asset to the project, but we might not be there yet at the moment. 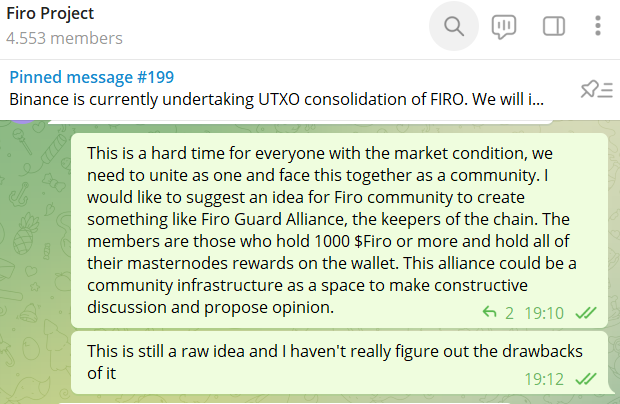 I posted this on the telegram group few days a go, the initial idea is to create a community infrastructure for those who run masternodes and not spending the rewards. However, after some thought and readings, there are several drawbacks to the idea such as:

As a result I tried to think about another alternative and found the existing infrastructure interesting: opencollective and social media.

Why? Because when a person donates, that’s it. Doesn’t mean he or she in return can make decision or direct the project. This is a healthy source of funding and will be significant in the long term.

Now why donation makes sense for the donor?

Because Firo is a public good. It serves humanity with the ability to have a full control of their asset that is impossible to be obtained elsewhere including from land, gold, stock, bitcoin. Why is it important? Because the world is governed by human, and human is not perfect. It is good that perhaps right now we have a responsible governments in many countries but there is no guarantee that things will stay like that forever. There is no guarantee that there will be no world war III that will makes us no longer fully own and control our assets, except Firo.

We could appreciate certain donors by sending good quality Firo merchandise and a soulbond token (SBTs) as a souvenir of appreciation for example. This will be interesting. I think it would be nice for our Trail of Bits audits donor for example to receive a soulbond NFT for their web3 footprint that they can use as profile picture on lensfrens.xyz perhaps. It’s like saying, the industry appreciate your contribution.

However, this source of funding is also have some drawbacks, the most important one is: It is not easy to promote. We can continue our efforts on this like for example giving special status and gamified donor tiering level on Firo Forum, which is really good infrastructure that we could leverage, however I don’t know if we can push this area into a level where it can be a very strong infrastructure to defend Firo project including our $FIRO token value, especially during the winter.

Hence, a new thinking need to be formed and explored. It might failed but at least we try right? By this post I would like to invite all of you to brainstorm ideas on how we could have an alliance of community members (that would function as something like the Night’s Watch in Game of Throne), brave mans who defend the Castle Black. What is/are the prerequisites to join the alliance? What the alliance should do to defend Firo especially the precious Firo token value?

Well Firo Foxes NFTs is an upcoming project of mine that I’m planning to do to reward donators and contributors.

This is a really good initiatives! Reuben how is the possibility to create SBT’s on Elysium?

Not currently but I don’t think it’s difficult to create a token that you can’t transfer so it’s possible to do it on Elysium with some modifications. Just how you would choose who should get a SBT (if let’s say it’s for voting) is problematic.

If its just for commemorative sure though Elysium itself isn’t designed with NFTs in mind.

Is this idea meant to promote hodl’ing or drive donations?

The idea is to have a solid alliance of community members that truly support and believe in Firo especially during bad market conditions. To join the alliance or what I refer to as the Night’s Watch in the post, ones need to make himself worthy by doing something, what is that ‘thing’? The ‘thing’ should also be significantly important for Firo as a project especially also to defend the value of Firo token, since higher Firo value means higher ability for the Firo project to do and achieve more.